The highest banknote denomination you can get in the US is a $100 note. What if I tell you that there exists a $10,000 note in Singapore which is being used since 1967! It is also a very highly traded currency on the foreign exchange market. Let us have a look at how the currency first came into the limelight, its history and all the coins and banknotes used by the banks of Singapore

What is the Singapore Dollar?

The Singapore Dollar (SGD) is the official currency of Singapore. The dollar is divided into 100 cents, i.e., 100 cents = 1 dollar. It is denoted by the dollar sign ($) or S$ to distinguish it from the other currencies which also have the dollar sign such as the USD, AUD, etc. All the banknotes and coins are issued by the Monetary Authority of Singapore. The Singapore dollar is the 13th most traded currency in the world [1].

Singapore established the Board of Commissioners of Currency on 7 April 1967 and issued its first coins and notes [2]. It was introduced right after the breakdown of the monetary union between Malaysia and Brunei. Before the currency, Singapore ranged from the Straits Dollar to the Malayan Dollar to the British Borneo dollar. The delivery date for the trade of SGD is T+2 days. The value of the dollar at the time was 8.57 dollars = 1 Great Britain Pound (GPB). This peg lasted for a few years after which the Singapore dollar was pegged to the USD. After a few years, the dollar was pegged to a fixed and undisclosed basket of currencies from 1973 to 1985 due to the growth in Singapore’s economy.

Since 1985, the Monetary Authority of Singapore has allowed the dollar to float within a range of foreign exchange rates to control inflation and support the value of the exports of Singapore. In 2016, the SGD accounted for 1.8% of the daily trade volume [1]. 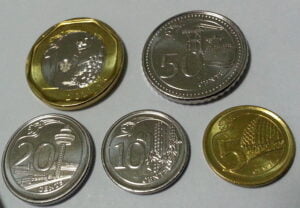 The Monetary Authority of Singapore announced a new series of coins which were circulated starting from 2013. These featured the icons and landmarks of Singapore. This is known as the Iconic Series. Here are the details and specifications of these coins.

The first series of banknotes were circulated from 1967-1976. These were called the Orchid series. Each note had an orchid in its center as orchid is the national flower of Singapore. The second series, Bird series, was the second set of notes issued by Singapore in the years 1976 to 1984. It had the same denominations as the orchid series albeit the $25 note was replaced with $20 note. Each note had a lion head watermark and signature of the Ministry of Finance. The 3rd Series of notes were the Ship Series, and they were circulated from 1984-1999. These notes contained different types of ships which were piled on Singapore’s waters over the years. 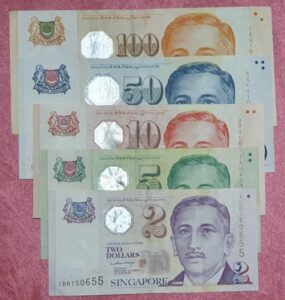 The current series is the Portrait Series. These notes feature the face of the first President of the Republic of Singapore, Yusof bin Ishak. The back of these notes is a depict of the civic virtue. These notes are made of paper as well as polymer. Here are the details and specifications of these banknotes.